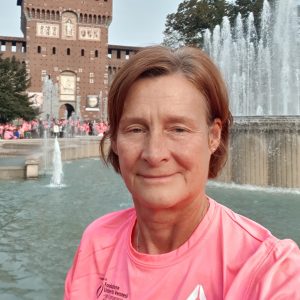 One April night on the shores of Lac Leman, I awoke with breathtakingly severe tummy pain under my right rib cage. Being a doctor, differential diagnoses whirled round my mind. I settled on the idea of acute pancreatitis due to my years of enthusiastic red wine consumption. I was wrong. At a coincidental routine medical booked the next day, the doctor was horrified when the blood test results indicated a possible bile duct obstruction and sent me off for an ultrasound. As I drove to the hospital in Geneva watching sunbeams dancing off the lake, I realised my life was about to take a direction I had never envisaged.

“It’s extra-hepatic” said the radiologist, as I could see the massively dilated bile ducts in my liver, like a dark, gnarled tree. Inwardly I rejoiced, because if it had been in the liver, I was done for. I broke the news to my friends, who being mostly medical, scurried round to find me the “best man for the job” back in the UK. As I sat and translated my radiology report into to English, so they could use it, I felt this was happening to someone else, not me. That evening I hosted my running club dinner for 30 people. I simply wanted life to remain unchanged.

That was Wednesday, by Friday I was in the UK, bright yellow, itching like crazy and under the care of Prof Nariman Karanjia, Consultant Surgeon and Trustee of BRIGHT. Luckily, the best man for the job turned out to be in Guildford, right on my doorstep. The CT scan confirmed a bile duct tumour sitting at the head of the pancreas, but no evidence of metastases. Good. It was to be a Whipple’s for me. This is where the gall bladder, bile duct, head of the pancreas, duodenum and a few other bits and bobs are removed and the remaining gut, replumbed. It is one of the most daunting abdominal surgeries for patients and surgeons, alike.

The surgery went like a dream (literally). I woke up in High Dependency to find myself strapped to a forest of machines that went ping and pinned to the bed like Gulliver, with so many tubes inserted. “Mummy you look broken” said my 12 year-old son. No, not broken anymore, I am better. The tumour was completely removed and there was no local spread. I had every chance of being cured.  Thanks to the fantastic surgery and aftercare I had from the Nuffield team, I had no post-op difficulties, whatsoever and was discharged after 7 days, missing the local record for time to discharge post Whipple’s, by half a day.

Being young(ish) and fit, I was referred for prophylactic, low-grade chemotherapy. Enter bombshell number two. Post-op scans and blood tests suggested liver metastases. To develop those in six weeks was dire. I was terrified. Dr Cummins was ever reassuring but I was unreassurable. There was nothing for it but to go along with whatever therapy was suggested and pray for a good outcome. It felt like being swept along in an unstoppable tide, my future being washed away. My situation was complicated, with my husband in a new job in Dubai, my son completing his school year in Geneva and me in Guildford. The wonderful oncology team kept me steady on my emotional rollercoaster and gave me exceptional care. Then the tide turned once more. The scans and blood tests reverted towards normal. The delighted team cheered and hugged me. A genuine personal touch.

That was 2013. I survived unscathed and I am forever grateful to everyone who helped me, with their world-class professional skills and personal dedication. I have no doubt that the work BRIGHT does to support professionals at the Royal Surrey Hospital to understand and treat this disease has helped me and will help many more in the future. I am delighted to hear that BRIGHT have recently funded a new ultrasound machine for these sorts of operations and are raising money for a Nanoknife machine; what a difference this will make.